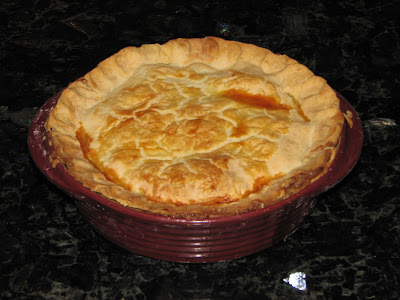 Although I don't bake near as much as I used to at Christmas, I do like the odd festive treat.

The other day, Dad was telling me that Mom was busy in the kitchen baking our traditional 'bastada' pie, which is sour pork pie that has its roots in Alsace Lorraine, France. The recipe has been part of family Christmases in Castroville, Texas, for generations.

Living in England, I tend to feel separated from my family, heritage and culture, especially at Christmas. Cooking family classics helps to keep the traditions alive, even if we are thousands of miles away from Texas!

Bastada pie is made of minced pork, which is 'soured' in a vinegar mixture along with onion, parsley and bay leaves and left to marinate for 24 to 48 hours. The mixture is then put into a shortcrust pie and baked until golden brown (see above for a photo of my bastada pie!).

Because I'm gluten-intolerant, I can't easily purchase store-bought, ready-to-bake crusts. Therefore, I scoured the internet for recipes and came up with my own shortcrust pastry concoction, which seemed to work a treat!

If you don't have almond flour, double the rice flour to 2/3 cups.

Use a food processor and whir up the butter with all the flours, salt and xanthan gum.

After the mixture is crumbly, drop in the beaten egg into the mixture and whir again. Now scrape down the edges of your food processor to release some of the butter/flour that might be sticking to the sides and bottom.

Add in the vinegar and continue whirring the mixture.

Check to see if the mixture has the right consistency. If it doesn't, you can add in egg whites (I always have a carton of egg whites in the house).

Don't over process or add too much liquid. You can tell the consistency is right when you can squish the mixture together.

Put out on a pastry board and roll it out.

Posted by Kathy the Teawife at 5:10 AM No comments: 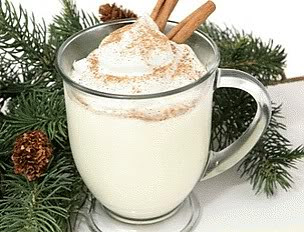 I've always been a real fan of eggnog, and it's been a traditional item in our family Christmas celebrations since I was a child. However, living in England presents problems in obtaining eggnog, which doesn't seem to be a popular drink. This is a puzzle because the origins of this festive drink are supposed to be English!

I recently had a little Christmas party for some of my American and international crafting friends. I decided to make eggnog since I'm not able to source it here. I loved the results, and I've promised some of my friends I'd post the recipe. I've made this a non-alcoholic recipe; traditionally, it features lots of rum or bourbon.
Teawife's Eggnog

Whisk all the ingredients together.

These are your basic ingredients. If you want a bigger batch, you can double or triple the recipe.

What you do next is up to you. Many recipes do not heat the eggnog. However, I decided to be safe and heat set my mixture. You can use a double boiler or carefully cook in a saucepan; but I used the microwave and one of my Pampered Chef glass mixing pitchers. To microwave, use 50 percent power and cook for 2 minutes at a time. Then whisk the mixture. Microwave again for 2 minutes at 50 percent. Then whisk again. You continue to do this for about 8 to 10 minutes total. The mixture will just begin to thicken when the temperature is correct. Do not overcook! Let the eggnog cool and then whip it again. If the eggnog is too thick for your tastes, you can add a bit more whole milk. If you like the taste of nutmeg, you can add it now and mix it through. Now chill the eggnog until ready to serve. Be sure to whisk the eggnog before serving. More nutmeg can be sprinkled on top of each serving.

Posted by Kathy the Teawife at 10:57 AM No comments: 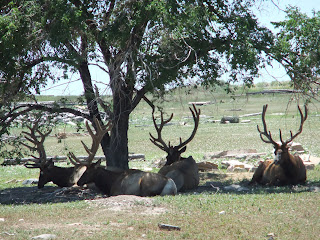 Earlier in the week, tourists were stopping in our neighborhood to take photos of a gang of Bull Elks (or wapiti, as they are called here in Colorado). I've never seen four to six Bull Elks travelling together before; I thought they'd be too territorial. However, here they are, sharing the shade of a tree located across the road near our Loveland home.
Posted by Kathy the Teawife at 4:32 PM 1 comment: 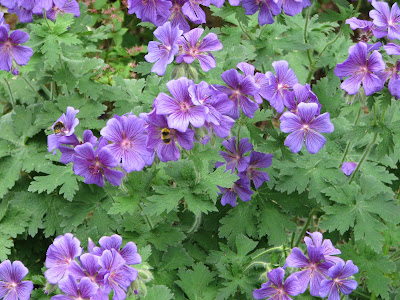 We've had a dry and warm beginning to Spring 2011 in our English garden. The garden hose -- or as it's often called here, the hosepipe -- has already been out in force. 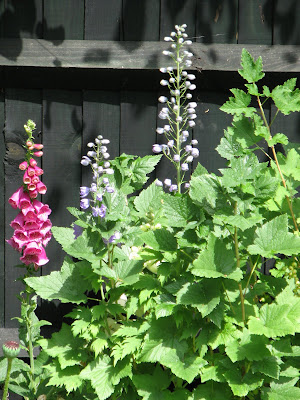 Above are currant bushes, a fox glove and Delphinium.
The warm spring has been a mixed blessing in the garden because the ample sunshine has brought everything into bloom earlier. However, great care must be made to keep things moist. I find it all a bit bizarre because I spent April in Colorado, where it was supposed to be mostly dry, and I experienced several snows, hail, sleet, freezing temperatures and lots of rain, and it continued to rain there through May. I come back to England, and they were enjoying summer-like temperatures of low humidity and little rain, and these pristine conditions have continued now into June. I'm not complaining by any means; just observing! 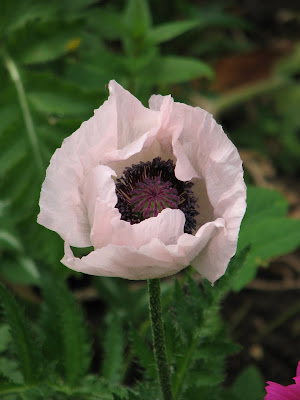 Back to my gardening adventures . . . I've planted a range of flowers in our back garden since moving here about three years ago. Although I re-infuse the garden every year with annuals, we also have perennials that have successfully come back each year, such as the Pink Poppy above and the Red Poppy below (which were planted last spring), along with Delphinium, Lupins, Fox Gloves, Peonies, and Columbine. 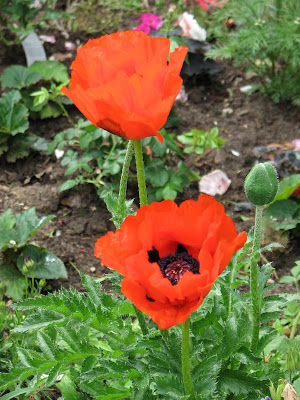 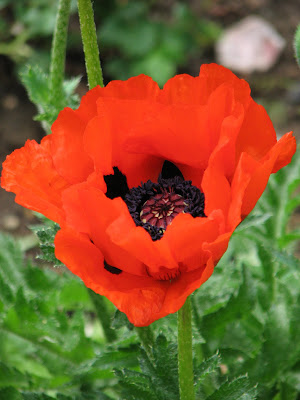 I also planted some strawberries in a disused gravel area, and they've come up really strong this spring, with lots of sweet fruit. 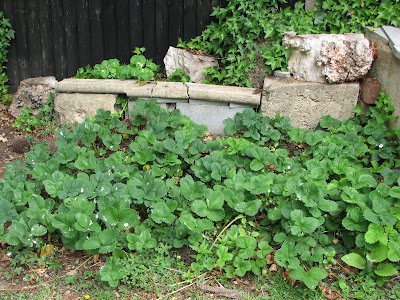 We have blueberries and white currants in one of our beds, too. 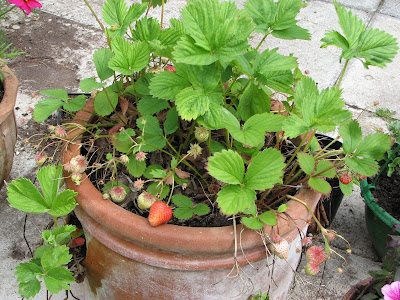 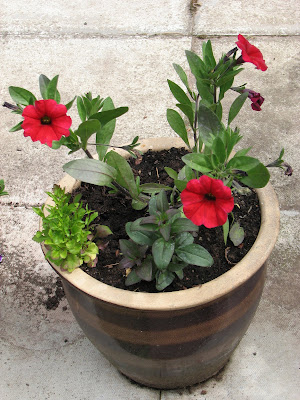 Although the pots look a little thin right now, they will be overflowing with color by mid-summer. 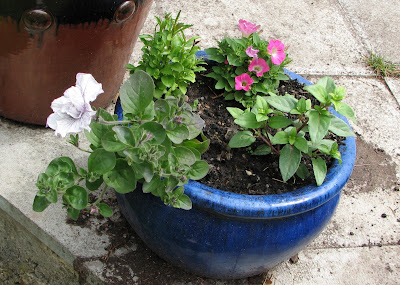 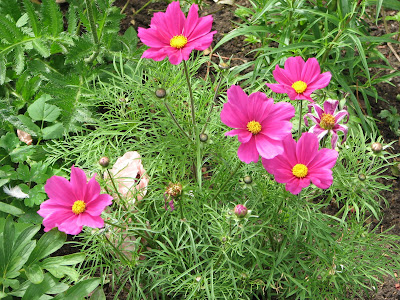 The birds also have been taking advantage of the warmer conditions, and many have begun fledgling their offspring much earlier than last year. Some of the interaction can be quite sweet, such as when a parent blue tit was feeding its young while sitting on top of a suet-filled coconut husk. Wish I could have captured this scene today.

*But then there are the STARLINGS!* 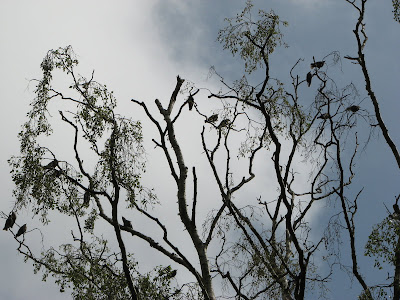 They have arrived at the feeders with their fledglings about a month earlier than last year. The onslaught of starlings drives dear hubby Niall nuts! He has nick-named them the Orcs of the bird world (as in the trolls from Lord of the Rings). We can have as many as 65 in our garden at once, and their noise is deafening. They are particularly interested in the suet pellets that we have in the feeders (we use them instead of peanuts). The suet pellets attract a wide range of birds, including stunning Greater and Lesser Spotted Woodpeckers, which fly over from nearby Norbury Woods. However, Niall is tempted to forgo the suet pellets to dissuade the starlings from overtaking our garden. We seem to forever go outside, clapping our hands and yelling to scare away those persistent starlings.  But then, they are back as soon as we turn our backs. If we are sitting outside, taking in the lovely weather, sharing a cup of tea on the patio, the Starlings will perch in trees and wait for us to leave! The constant cacophony of shrills from them is enough to send us back inside.

I asked my contact at Wildbird Direct, where I order my bird food, how to discourage Starlings from the feeders since they dominate and don't allow the smaller song birds to eat. Darren said: 'If I had a pound for every time a customer asked me that question.' Oh well . . .

Then I discovered they have a natural enemy: the magpie. If the starlings are the Orcs of the bird world, the magpies are the Orcas! Not only do they have the same coloration as a killer whale, but they will hunt down fledgling starlings, as I found out one morning. Those of you readers with a predisposition to a queasy tummy should skip this part! Last week, I heard a frantic shrieking from the back yard and saw a pair of magpies murdering one of the Starlings. I tried to get there in time to break up the massacre, but alas, I was too late! Murder by a hundred pecks.

Our garden has become the scene of not only beauty and color, but of murder, mystery and mayhem!!
Posted by Kathy the Teawife at 1:31 PM 2 comments:

Recently, tea friends Holly and Eve reminded me of an old family recipe that is made with day-old strong tea. The fact that Niall and Robert's lovely Gran McAllister is still remembered for her infamous Boiled Cake, is quite touching. Niall absolutely adores this cake, and I must admit that I don't make it near as often as I should.
By popular demand, I am posting Gran's Boiled Cake recipe here so that a little of her lives on. Enjoy with health!
Posted by Kathy the Teawife at 1:19 PM 1 comment: 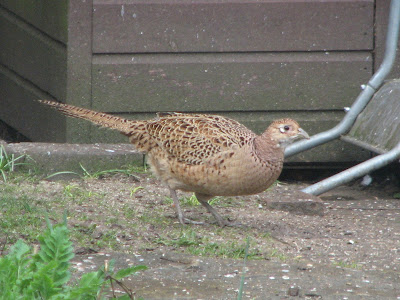 We have a new regular visitor to our English garden: a pheasant. 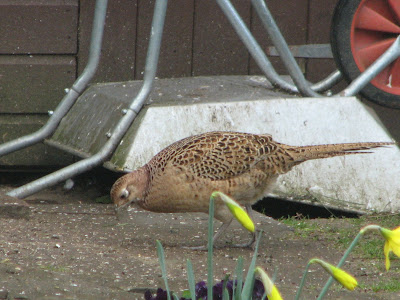 She's been coming once or twice a day to poke around on the seeds that fall from the bird feeders. She mixes it up with the wood pigeons that fly over from Norbury Woods across the road. 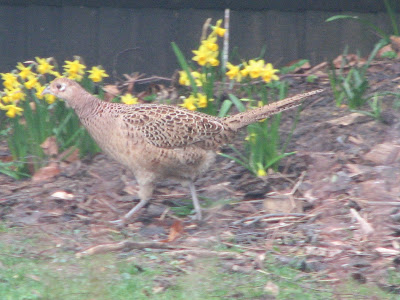 Hopefully, she will stay clear of the other garden visitor, Foxy, that I mentioned in the previous post. 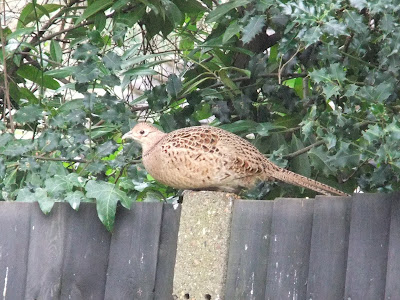 Posted by Kathy the Teawife at 4:47 AM 2 comments: 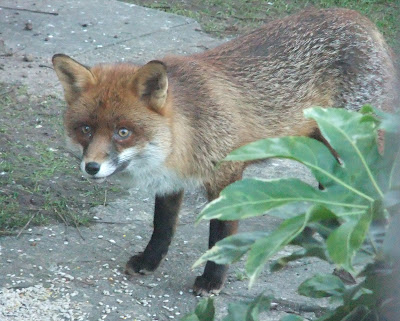 While we've known we have foxes that come nightly to our gardens in England, we rarely see them during the day. However, one fox seems to be particularly brave and unconcerned that we have a Border Collie, Sophie, who usually is quite demonstrative about unwelcome parties. While this particular fox was scrounging around the bird seed, I was able to snap some photos through the window next to my crafting table.
Posted by Kathy the Teawife at 6:22 AM 1 comment:

Kathy the Teawife
Hello, All! I’m Kathy the Teawife . . . I have been fortunate to travel around the world and have lived in the United States, England, Malaysia and Abu Dhabi. I've now settled in a lakehouse nestled in the Colorado Front Range with my Irish hubby. While I started my professional career as a publication writer and editor, my various detours and life events have led me into different avenues. Now, my time is filled pottering in the garden when the weather is warm and wonderful, taking photos, messing around with design software, and stealing away time in my art room to create mixed media art pieces and hand-crafted cards. My favorite thing by far is spending time with our son who is a medical researcher in Cardiff, Wales. We do not see him enough, so we spend countless hours chatting over Skype.